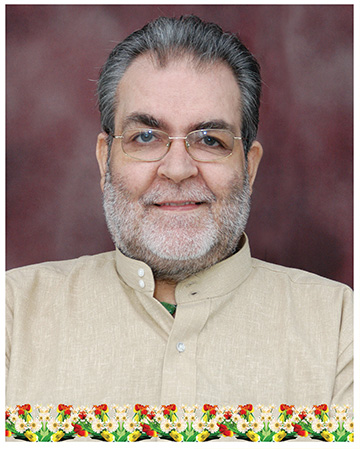 Matthew Norton, son of Dr. Desmond Norton and Ms. Patricia, was born in 1953 in UK. He joined the Hare Krishna Movement in 1974 leading a meaningful life after so much seeking. He travelled widely in the States, Europe and India. While he was in India he was touched by the pathetic condition of the orphan, semi-orphan and runaway children living on the streets and railway platforms. In order to help such needy children he started a Charitable Trust and got it registered as Sri Krishna Chaitanya Vidyavihar Children’s Trust in 1984.

Matthew married Bhakti, an Indian girl in Pune in 1988. After working in Pune for a few years they moved to Vijayawada in Andhra Pradesh. Matthew took the name of Manihara and was known fondly known as ‘Pitaji’ (father). 25 years of caring for children was life’s blood for Matthew but it took its toll on him. He suffered from severe osteoporosis sustaining many broken bones and 2 new hips, finally severe pain from a nerve trapped in a healed broken back. In 2008 he was given the prestigious Annual Award from the All India Rotary International for his outstanding services to children that moved him greatly. A year later, greatly incapacitated, he died suddenly and quite unexpectedly on 1 June 2009 at the age of 56. All who knew him acknowledge his amazing qualities of commitment to his vision and spirit of service. He is remembered by the hundreds of children he loved so much and who were helped to lead a purposeful and happy life.